It is possible that the integration of AI, RPA, ML, and cognitive platforms will cause so much upheaval that it will be known as the “Fourth Industrial Revolution,” a term coined by Klaus Schwab, the founder of The World Economic Forum.

Incorporating elements of different technologies is now the norm. In order to get AI software onto the world’s millions of graphics and computer processors, businesses are developing the infrastructure to do so. AI, ML and natural language processing done through advanced computing will be used to solve a variety of challenges. The use of robotic appliances is becoming standard practise when implementing AI. The future of sustainability, health, and even war itself will be profoundly affected by the advent of smart robotics. There is still a lot of mystery and misunderstanding surrounding the terminology associated with this technology.

AI is the capacity of machines to perform actions and find solutions to problems in ways typically associated with humans. But because of the human intervention required in their creation, AI machines are restricted in what they can do and what they can learn.

RPA, or Robotic Process Automation, is a new type of BPA technology that utilises the concept of software robots or AI workers to complete various business processes.

All major Internet corporations have their foundations in Machine Learning, a subfield of AI. It’s the method of equipping computers with the ability to analyse their own data and improve their performance accordingly. Search engines, for instance, use finely tuned algorithms to rank results, provide suggestions, and ultimately choose the content that is most relevant to a given user.

The human brain serves as a model for Deep Learning’s infinite complexity. Deep learning, in contrast to traditional machine learning, can train computers to focus solely on the most salient aspects of an audio or visual signal. By removing the need for a human driver, deep learning has paved the way for fully autonomous vehicles and medical analysis systems that are more accurate at detecting cancer in its earliest stages than the naked eye. 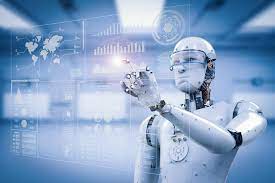 Perceiving, inferring, gathering evidence, hypothesising, and reasoning are all human abilities that can be simulated with cognitive augmentation. These systems can be taught to carry out responsibilities that require a high level of judgement when coupled with modern automation, analytics, mobile, and cloud technologies.

It’s the stuff of science fiction nightmares: a superintelligent robot rebels, usually violently, with the goal of eradicating or enslaving humanity (think HAL from 2001: A Space Odyssey or WOPR from War Games), and then there’s Skynet and its formidable electromechanical creation, the Cyberdyne ‘Model 101,’ aka ‘The Terminator.’

Many creators of artificial intelligence (AI) look to Isaac Asimov’s “Three Laws of Robotics” as a guiding principle for AI safety. These “laws” were originally devised in his short story “Runaround” from his novel “I, Robot” more than seven decades ago.

A robot is not permitted to cause harm to a human being or to passively allow such harm to occur;

In all cases where it is not in direct violation of the First Law, a robot must follow the commands given to it by humans.

As long as doing so doesn’t violate the First or Second Laws, robots have an obligation to safeguard their own existence.

Asimov’s “I, Robot” portrayed the potential benefits of robotics for human rehabilitation as well as the likelihood that human perversion and manipulation of AI will pose a greater threat to humanity than any malicious plotting or cognitive calculations of malice devised by machines’ deep learning.

Researchers at Massachusetts’s Tufts University are using machine learning to teach robots to reject a wide variety of human commands that could be dangerous to the robot or to people. Humans can bypass the AI’s morality system if they are already in the robot’s trust network; otherwise, the human’s order is disregarded.

Developers have already taken preliminary steps toward a kind of AI ethical code, which seeks to avert the technological apocalypse that dystopian writers and technophobes seem to thrive on. This code may not be an exact replica of Asimov’s directives, but it is a step in the right direction.

Technophobia isn’t exclusive to science fiction. The hydrogen bomb’s chain reaction with the hydrogen in Earth’s atmosphere and transforming the planet into a new sun was the basis for many credible scientists’ protests at ‘Operation Ivy: Mike’ in 1952. In 2008, opponents of the CERN (European Organization for Nuclear Research) Large Hadron Collider project filed a lawsuit at the European Court of Human Rights against the 20 countries, including the UK, that funded the project. Residents of Hawaii also filed a court order with the US Supreme Court in an attempt to compel the US Government to intervene. They were concerned that the device, which smashes atoms together at high speed and generates temperatures of over a trillion degrees Centigrade, would likely create a mini-black hole that could tear the earth apart.

There wasn’t a new rival for the sun, and thankfully, Earth is still intact. Sci-fi film franchises that depicted the end of humanity as a result of computer-controlled nuclear or robotic destruction have been placed on hold. Voice assistants like Siri, Alexa, and Cortana, and augmented reality headsets like Google Glass, are replacing it. This convergence of AI, AR, and VR has been manifested in real-world applications across industries, from construction to the arts to medicine to transportation to defence. In a similar vein, experiments at CERN are unravelling many theories pertaining to the beginning of the cosmos, and the study of hydrogen has become an avenue for alternative energy.

Both document scanners and cameras now have near-perfect optical character recognition (OCR) capabilities because to advances in image science and expert engineering. Using a protocol library for form recognition and some fresh techniques, we may construct an integration of contextual logic databases for fully automated validation. The field of “imaging technologies” has made great strides thanks to this development over the past few years.

We may expect the convergence of physical and cognitive technologies to affect many domains and spheres of our existence, including safety. There is little doubt that radar and imaging technology have become an integral aspect of security screening, especially in the aviation industry. Sensors like X-rays and millimetre waves are used in aviation and event security, respectively.

Traditional security and ‘airside’ checkpoint sites have been exploited to devastating effect, as shown by recent occurrences in Las Vegas, Manchester, Istanbul, and Brussels. Worldwide, security experts agree that timely, actionable intelligence is essential for effective security management. Technologies such as remote detection, artificial intelligence, and straightforward alerts designed for smooth integration into existing systems will make this a reality. Plymouth Rock Technologies’ primary goal is to combine Deep Learning with sensor technology.

We are collectively on the cusp of a new technological renaissance ushered in by a wave of connected, cutting-edge technologies known as “techno-fusion,” which fuses together established fields such as engineering and science with more nascent ones such as artificial intelligence and physics as well as human culture.

In the same way that Plymouth Rock was the first landing place for European settlers in the New World, the pioneering work of Plymouth Rock Technologies on the earliest Hadron Collider technologies formed the foundation for the modern scientific revolution. Now, we’re rethinking the capabilities of Unmanned Aircraft Systems in terms of their sensory detection and their ability to fly themselves autonomously, all to aid the emergency services and law enforcement. Our work is laying the groundwork for a future where increased security and safety awareness are commonplace, and we’re doing it by drawing on expertise from across disciplines.

Technology may offer some hope, but no matter how far we progress, problems will always be with us. There is little doubt that scientific and technological advancements will determine the course of our futures; our efforts to guide this progress and coordinate its myriad links will also radically alter the course of our lives.